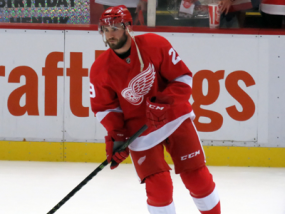 53
0
by Clark Rasmussen
In General News

Ferraro, 24, is coming off a knee injury suffered two weeks ago against the Toronto Maple Leafs. With no room in the Detroit lineup, the Red Wings waived Ferraro in an attempt to assign him to the Grand Rapids Griffins of the American Hockey League.

He had been placed on waivers at noon on Saturday. To remain with the Detroit organization, all 29 other teams would have needed to pass on him by noon on Sunday. The Bruins were 15th in waiver priority.

In ten games with the Red Wings this season, Ferraro had no points. In 17 career games across three seasons he had one goal and no assists.

Ferraro was Detroit’s second round (32nd overall) selection in the 2009 NHL Entry Draft.