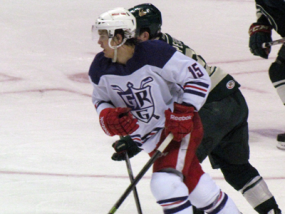 108
0
by Clark Rasmussen
In General News

Landon Ferraro, Mitch Callahan, and Kevin Porter will all be available to be claimed by the rest of the league until noon on Monday. If they are not claimed, the trio are expected to be assigned to the Grand Rapids Griffins.

Ferraro and Callahan have spent most of their professional careers with the Griffins, earning brief call-ups to the Red Wings last season. Porter was signed by Detroit to a two-way deal over the summer.

Ferraro, 23 and the son of former NHLer Ray, was held pointless in four career NHL games. In 200 AHL games he has 48 goals and 50 assists for 98 points, along with a -3 rating and 143 penalty minutes.

Porter, 28, has played six NHL seasons split between the Phoenix Coyotes, Colorado Avalanche, and Buffalo Sabres. In 206 career games he has 29 goals and 26 assists for 55 points. He had 19 goals and 17 assists last season for the AHL’s Rochester Americans, where he played 50 games.

Notably not waived on Sunday was Andrej Nestrasil, who will require waivers to return to the Griffins this season.

Final rosters for the start of the NHL season must be set by Tuesday at 5:00 PM. Any players who need to clear waivers will need to be waived by noon on Monday.