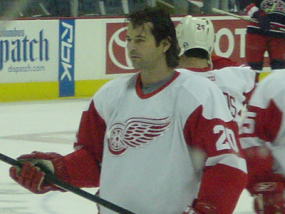 It’s been known since before the 2013-14 season was even over that the Red Wings would be looking to upgrade their defense this summer and their best opportunity to do some comes tomorrow as free agents become eligible to sign contracts with new teams at noon.

The costs are expected to be high, however. Even with the late additions of Christian Ehrhoff and Ed Jovanovski to the free agent pool (due to buyouts by Buffalo and Florida, respectively), there are roughly fifteen teams legitimately thought to be in the mix for only six or seven players.

If Detroit were to miss out on Ehrhoff or Matt Niskanen or Anton Stralman or whoever (as they did when they were unable to woo Ryan Suter in 2012 and had to settle for Carlo Colaiacovo), they would be forced to turn to the trade market, where their history isn’t quite so successful.

The Red Wings haven’t traded for a roster player signed beyond the end of the current season since acquiring Robert Lang from the Washington Capitals in 2004, when he was two years into a five-year deal.

Oh, sure, they picked up Brad Stuart at the deadline in 2008 and managed to sign him just before he became an unrestricted free agent that summer. They also got Kyle Quincey – likely departing in the coming weeks – in 2012 and re-signed him as a restricted free agent, as they expected to do when they paid the hefty price of a first round draft pick to get him.

By and large, however, Detroit’s method of acquiring players for the last decade has been via free agency, which means that if they miss out in the next few days they’ll be entering relatively-uncharted territory for the club.