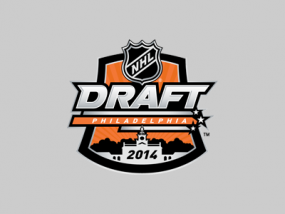 The Red Wings missed out on the second round, having sent that draft pick to the Nashville Predators in the David Legwand trade in March. To help make up for it, they moved up in the third round, sending their original third-rounder (76th overall) and a third-rounder in 2015 to the Columbus Blue Jackets for the 63rd overall pick, which they used to select Dominic Turgeon.

Turgeon, the 18-year-old son of former NHL star Pierre Turgeon, is a two-way center who scored ten goals and added 21 assists in 65 games for the Portland Winterhawks of the WHL in 2013-14.

At 106th overall in the fourth round, Detroit went with another center, Christopher Ehn of Froluna Juniors in Sweden. The 6’2″ 18-year-old scored four goals and seven assists in 45 games 2013-14.

The Red Wings turned to a goalie in the fifth round, selecting Thomas “Chase” Perry of the NAHL’s Wenatchee Wild. Perry, 18, had a 2.34 goals-against average and a .905 save percentage in 35 games last season. The Andover, MD, native is commited to play for Colorado College next season.

In the ninth round Detroit selected 19-year-old winger Julius Vahatalo of TPS in Finland. Vahatalo is 6’5″ but only 191 pounds and had previously been passed over in the 2013 NHL Entry Draft. He had 18 goals and 21 assists in 33 games for the junior TPS squad, adding three goals in 18 games for the main club.

Two seventh-round selections closed out the draft for Detroit.

At 186th overall, the team selected Swedish center Axel Holmstrom. Holmstrom – who is not related to former Red Wing Tomas Holmstrom – had 15 goals and 23 assists in 33 games for Skelleftea. He turns 18 on Sunday.

At 201st overall the Red Wings went with center Alexander Kadeykin of Russia. Kadeykin, 20, went unselected in both 2012 and 2013. He scored eight goals and fifteen assists in 54 games for the KHL’s Atlant Mytishchi.


Thoughts on Trading as a Fall Back Option