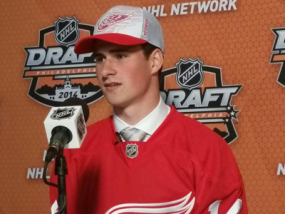 The 6’1″ Larkin scored 17 goals and added nine assists for 26 points in 26 games in the USHL for the Ann Arbor-based US National Development Team. He added 56 points in 60 games for the US National U18 team and four points in six games as the alternate captain for the United States’ entry at the World Junior Championships.

Michael Petrella of The Production Line called Larkin the biggest of a handful of centers that would be available to the Wings and that he “will be playing most locally at the University of Michigan. The Wings are no strangers to collegiate prospects (Howard, Smith, DeKeyser, Nyquist, Abdelkader, Glendening, etc.) and that system has served them well.”