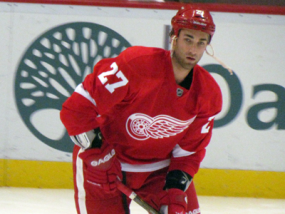 This isn’t a new idea by any means. Quincey has been a scapegoat among the Detroit fanbase since about a week after he returned to the team in a trade deadline deal in 2012.

What’s interesting is that, this time, the suggestion was put forth by a member of the mainstream media. Traditionally (and for whatever reason you want to blame), the writers on the Red Wings’ beat don’t publish anything that could be considered controversial. Suggesting that a current roster player be dealt – and not taking it from the perspective of “this is what it might take to bring in Player X” – is something that hasn’t often been done. Especially damning is that St. James specifically calls Quincey’s play “mediocre.”

It could be the Red Wings brass speaking through the media. It could be that things are changing and the beat writers have a little more freedom than they previously seemed to. Given the team’s history with the media, though, this seems to carry some weight.

That said, the mainstream media-types were reporting that the Wings were looking to deal Jordin Tootoo all summer. Patrick Eaves’ name came up. Those players, though, were pretty clearly the odd-men-out with Detroit’s cap (and roster space) crunch. Quincey isn’t quite in that boat, so it’s not quite the same thing to see his name in print.

For the record, I don’t see how any Quincey trade would be anything other than a salary dump. Detroit isn’t going to be able to flip Quincey for a prospect or high picks or anything like that. A probable deal – as St. James notes – would be Quincey for a late pick or a cheaper, older defenseman, with the Wings keeping some of Quincey’s contract. As Detroit already has Nathan Paetsch on an AHL-only deal with Grand Rapids, I’d rather see them get the late pick and the open spot on their 50-man reserve list, with the option to sign Paetsch if need be in the future.

We’ll see what happens. It’s all conjecture at this point but given the source, I’d be willing to be there’s substance there.