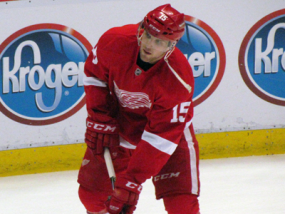 63
0
by Clark Rasmussen
In General News

As per club policy, financial terms were not announced. Reportedly the deal carries a $950,000 salary cap hit.

Sheahan spent 42 games with the Red Wings last season, scoring nine goals and 15 assists in assuming second-line duties after Detroit saw most of their centers go down to injury.

Upon conclusion of the contract, Sheahan will once again be a restricted free agent.


On Going All-In on Dan Boyle