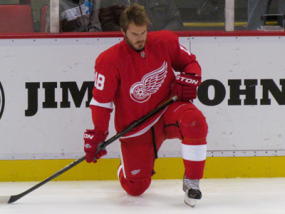 White Out Two to Three Weeks

Per the Detroit News’ Ted Kulfan, the Red Wings will be without defenseman Ian White for two to three weeks after he suffered a deep cut on his leg from the skate of Jimmy Howard in last night’s 2-1 loss to the Dallas Stars.

It’s a tough hit for an already decimated Detroit blue line to take. The team had to sign free agent Kent Huskins just to be able to ice a full lineup last night. If one of Jonathan Ericsson or Jakub Kindl can’t return from their injuries by Friday’s matchup with the Minnesota Wild, they’ll have to make another roster move to complete the lineup.

Of the defensemen in the Wings’s system, only Adam Almquist, Gleason Fournier and Max Nicastro are under contract. Any of those three could be called up but, generally, none of them are deemed NHL-ready.

The other option would be another Huskins-like signing. One reason that drove the Huskins signing was that he could physically make it to Detroit in time for last night’s game, as signing a player who wouldn’t be able to suit up wouldn’t help. With more time to work with, the Wings might be able to find another free agent to bring in for Friday.

If DET does sign another defenseman for Friday, half of their Game 4 blue line will have not been on the roster for Game 1.
— Clark Rasmussen (@detroithockey96) January 23, 2013

Update, 10:45 AM… Ansar Khan says no roster move will be made, as Jakub Kindl will return for Friday’s game.