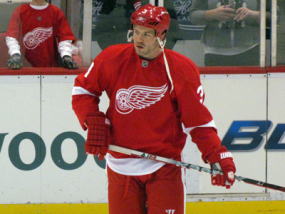 The Detroit Red Wings announced on Saturday that they have traded defenseman Kent Huskins to the Philadelphia Flyers for a conditional seventh round draft pick in 2014.

Huskins suited up for the Red Wings in eleven games this season, scoring no points and taking four penalty minutes while going a minus-three. He was signed just hours before the team’s home opener, when Detroit was already down three defensemen only two games into the season.

Huskins had last played on February 24 against the Columbus Blue Jackets.

With the pending return of Carlo Colaiacovo from injury and the Red Wings’ recent signing of defenseman Danny DeKeyser, Huskins became expendable.

With Huskins dealt and DeKeyser signed, the Red Wings still have a full 23-man roster, with Kyle Quincey, Todd Bertuzzi, Darren Helm and Mikael Samuelsson all on injured reserve.