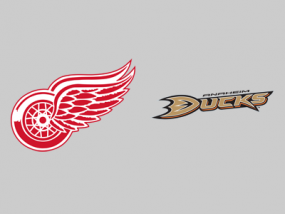 Bobby Ryan scored on a penalty shot 2:50 into overtime Wednesday night, lifting the Anaheim Ducks to a 2-1 win over the Detroit Red Wings.

Ryan cleanly beat Detroit goalie Jimmy Howard on his glove side. Howard then broke his stick over the goal post, venting his frustration at the call that led to the penalty shot.

Pavel Datsyuk scored the Red Wings’ lone goal at 5:10 of the second period, banking a shot from the left corner off of Ducks’ netminder Dan Ellis and into the net with Detroit on a power play.

Jason Blake tied the game up 1:54 into the third period, blasting a shot from the high slot past a screened Howard.

The Red Wings ended the night 1-for-9 on the power play, including 1:33 of 5-on-3 and 1:47 of 4-on-3 in overtime. The Ducks were scoreless on four power play tries but capitalized on the penalty shot.

The Red Wings are back in action Thursday night in San Jose.

Brian Rafalski missed his third consecutive game with back spasms. Jakub Kindl reminded in the lineup in his place… Johan Franzen returned to the team after missing one game for the birth of his son. Kris Draper was a healthy scratch to make room in the lineup.