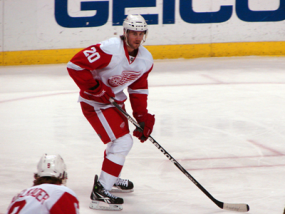 The Los Angeles Kings scored the final three goals Monday night but it wasn’t enough to recover from Detroit’s early scoring, with the Red Wings holding on for a 7-4 victory to kick off their West Coast road trip.

The Kings were already down 7-1 when they scored three goals in the final 7:34 of the game.

Dustin Brown made it 7-2 when he picked up a loose puck in front of Howard and whipped it past him.

Wayne Simmonds added another goal with 1:05 left to play, poking the puck past Howard from the top of the crease.

Michal Handzus had opened the scoring at 4:09 of the first, banging home a rebound chance from the side of the net on a Los Angeles power play.

Drew Miller replied for the Red Wings at 6:37 of the period, banking a shot off of LA goalie Jonathan Quick from an acute angle.

Detroit took the lead just 30 seconds later when Danny Cleary knifed a Jiri Hudler shot out of the air and past Quick from the slot.

A Nicklas Lidstrom blast from the blue line off a feed from Mike Modano made it 3-1 with 1:12 left in the first. It was Detroit’s first of two power play goals on the night.

Pavel Datsyuk scored the Wings’ second power play goal with 42 seconds left in the second period. Datsyuk held the puck in at the blue line and worked his way into the left faceoff circle to snap a shot over Quick’s glove.

Darren Helm made it 5-1 at 2:01 of the third period, clearing the puck past Drew Doughty at the point in the Detroit end and racing down the ice on a shorthanded breakaway before beating Quick five-hole.

Miller notched his second of the night at 5:53, knocking the rebound of a Kris Draper chance past Quick and ending the goaltender’s night.

Hudler wrapped up Detroit’s scoring with 9:38 to play, taking a cross-ice feed from Jakub Kindl and putting the puck into the open side of Jonathan Bernier’s net as a power play expired.

The Red Wings finished the night with two power play goals on four chances with the extra attacker. Los Angeles went one-for-four on the power play.

Howard made 35 saves on 39 shots in picking up the win. Quick took the loss with 18 saves on 24 shots, while Bernier stopped two of the three chances he faced.

The Red Wings continue their road trip on Wednesday in Anaheim.

The Red Wings were without defenseman Brian Rafalski and forward Johan Franzen. Rafalski missed his second consecutive game with back spasms while Franzen was allowed to remain home in Detroit following the birth of his first child.