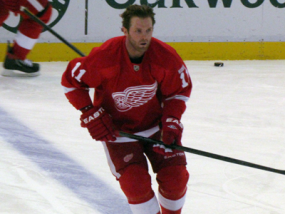 Red Wings Fall to Ducks in Game One, 3-1

The Detroit Red Wings couldn’t hold off the Anaheim Ducks’ special teams on Tuesday night, with two power-play goals propelling the Ducks to a 3-1 win over Detroit in the opening game of their Western Conference Quarterfinal series.

Detroit’s lone goal of the game was also a power play tally and Anaheim rounded out the scoring with an empty-net goal, meaning all four goals in the game came with an extra attacker on the ice.

Nick Bonino opened the game’s scoring for the Ducks at 10:24 of the first period, deflecting a Cam Fowler shot from the point past Detroit goalie Jimmy Howard just three seconds into Anaheim’s first power play of the game.

With 3:55 remaining in the period, Daniel Cleary tied things up when Jakub Kindl’s shot from the top of the right faceoff circle bounced off him and trickled past Anaheim netminder Jonas Hiller.

After a scoreless second period, Teemu Selanne snapped a shot from the right faceoff dot past Howard just 1:29 into the third to put the Ducks up 2-1.

The Red Wings were unable to recover and with 23 seconds remaining, Francois Beauchemin threw the puck from his own end into the empty net off a faceoff win to wrap up the game’s scoring.

Each team had four power play tries, with the Red Wings getting one goal to Anaheim’s two.

Howard made 24 saves on 26 shots against. Hiller stopped 21 of 22 Detroit shots.

The teams will meet again on Thursday for Game Two of the series.