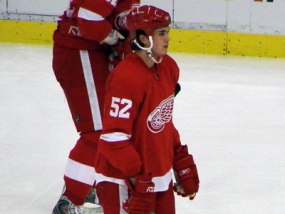 For the first time in quite awhile, the Red Wings will be facing a team with more players out to injury than Detroit has as they host the Carolina Hurricanes tonight.

The Red Wings will get Jonathan Ericsson back into the lineup, with Doug Janik being sent back to Grand Rapids.

Jimmy Howard gets the start in net for the Wings, likely going up against Carolina’s Cam Ward as former Red Wing Manny Legace is not expected to start.