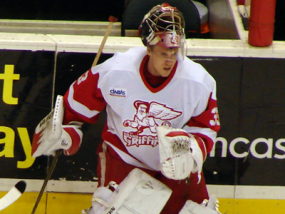 The Red Wings kick off their preseason schedule tonight, hosting the Philadelphia Flyers less than 24 hours after wrapping up training camp with the Red and White Game Monday night in Traverse City.

Detroit will use two rosters to start the exhibition schedule. The Red team featuring Pavel Datsyuk, Johan Franzen and Nicklas Lidstrom will get the nod tonight. The White team with Henrik Zetterberg, Dan Cleary and Niklas Kronwall will play on Friday against the New York Rangers.

It looks like there will be no live media coverage of tonight’s game. It will not be televised in Detroit or Philadelphia and it looks like radio coverage is out as well.

A note… If you see images from tonight’s game and wonder what’s wrong with the Wings’ jerseys, the answer is nothing. Every preseason the Wings use sweaters with names straight across the shoulders rather than the arched names they use during the regular season. Every season people forget about that and think a big change has been made.