I’ll be honest, this move surprised me.  That it’s a two-year deal surprised me even more.  Perron seems like the guy you sign late in the summer and flip to a contender looking for veteran depth at the trade deadline.

That said, he scored 27 goals last year – 11 of them on the power play – and 57 points total.  That should help Detroit’s anemic offense.

And he’s a pain to play against.  I rarely like bringing players like that to Detroit because I’ve gotten too used to hating them.  Chris Chelios was pretty much the lone exception to that rule.  But that doesn’t mean it’s not beneficial.

The Detroit Red Wings announced on Tuesday that they have signed forward Patrick Eaves to a one-year deal. As per club policy, financial terms of the contract were not announced. 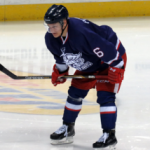