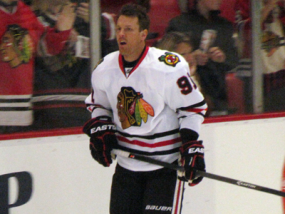 113
0
by Clark Rasmussen
In General News

Just hours after making a splash with their signing of free agent defenseman Mike Green, the Red Wings landed another new player in forward Brad Richards.

Richards, coming off a one-year deal with the Chicago Blackhawks, signed another one year contract to come to Detroit. The deal is reportedly worth $3 million, with playoff bonuses that could push it to $4 million.

Originally drafted in the third round, 64th overall, by the Tampa Bay Lightning in the 1998 NHL Entry Draft, Richards has gone on to play for the Dallas Stars and New York Rangers before last season’s championship run in Chicago. It was his second Stanley Cup, having claimed the Conn Smythe Trophy as playoff MVP during Tampa Bay’s 2004 run.