The Detroit Red Wings announced the signing of center Andrew Copp on Wednesday.

The deal had been rumored in the lead-up to NHL free agency opening.

While the team did not announce financial terms – as per usual – Copp’s contract reportedly carries a $5.625 million salary cap hit over five years.

That feels like a high number to me but it’s the same cap hit that Vincent Trocheck got from the New York Rangers – Copp’s now-former team – so it seems to be market value.  I do like that it’s “only” five years, as opposed to Trocheck’s seven-year deal.  I think it was probably GM Steve Yzerman‘s best option.  That doesn’t mean there’s not risk, though.

Copp put up points at a prolific rate in his short run with the New York Rangers last spring but never matched that during his tenure with the Winnipeg Jets.  Is the former indicative of what he can do with an increased role or an outlier?

My biggest feeling is that the deal seemed inevitable.  The Ann Arbor native played with Compuware, the USNTDP, and at Michigan.  But if this is a “local guy comes home” thing, it would have been nice to see a hometown discount as part of it.  The Wings have plenty of cap space now but raises will be due for a ton of players over the life of this deal. 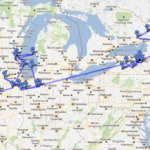 On the Center of the NHL Universe

It wouldn't be hard to argue that the center of the NHL universe is Toronto, but it appears that St. Louis might have some evidence to back up a claim to that title.

The Boston Bruins announced the signing of free agent goaltender Felix "The Cat" Potvin Wednesday, bowing out of the running to pick up Curtis Joseph from the Detroit Red Wings. Potvin was signed to a one-year, $1.3 million deal.