The deal is reportedly for four years at a cap hit of $4.75 million.

That term is hard to swallow.  The cap hit…  If it had been two years, sure.  The Wings won’t be near the cap for the next couple years, let Chris Ilitch spend money.  But at four years, that gets into extension time for a lot of players.  As I said with the Andrew Copp deal, that gets problematic.

The difficult thing is that Chiarot is an upgrade to Detroit’s defense.  Certainly not a particularly exciting upgrade, but the Wings were bad last year.  He should make them much harder to play against.

Maybe next fall I can look at this deal and appreciate that more.  In the summer, though, it’s a lot harder to see that. 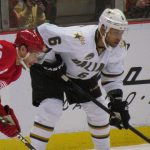 Thoughts on the Red Wings' deal for defenseman Nick Leddy on Friday night.