The Red Wings were busy on the opening day of free agency, signing six NHLers, one draft pick, and agreeing to terms with one more player.

Eighth-overall pick Marco Kasper kicked things off, agreeing to his entry-level deal.  The contract was announced just after free agency opened, which wasn’t necessary, and feels like a bit of a troll by the Red Wings’ PR team.

Just after that, Andrew Copp joined Detroit.  He immediately slots in as the team’s second-line center.  As I said earlier, I wish his five-year deal was four years, but I don’t think that’s the end of the world.  If he’s playing out the end of his deal on the third line, having made way for Kasper on the second line, that’s not a bad place to be in.

Detroit was then linked to Olli Maatta, and by all accounts a deal is in place there but not finalized.  I like that move to shore up the left side of the defense with the departures of Marc Staal and Danny DeKeyser.  I just wish they’d get it done.

Insiders linked the Red Wings to both Ben Chiarot and David Perron but the next deal announced was Dominik Kubalik.  I love his two-year, $2.5 million deal.  This is a cheap, short-term move with nothing but upside.

Chiarot, however, concerns me.  Four years at at $4.75 million cap hit feels like it will age horribly.  That said, the cap should start increasing so it may not hurt as much as it looks like right now.  There’s some hope there, but hope is not a strategy.

Perron rounded out the day at the NHL level.  This one leaves a bad taste in my mouth but doesn’t appear to be a bad deal.  After all this time, I just don’t like Perron.  Now maybe it’s time for the Wings’ opponents to not like him, too.

My takeaway after this big day of signings is that there is probably a forward on his way out of Detroit.  Robby Fabbri is expected to start the season on IR but that still pushes one of Joe Veleno or Adam Erne out of the lineup, which seems less than ideal.  Erne, in particular, seems redundant now and I wonder if Steve Yzerman might end up shopping him around.

Because I’m a jersey number geek, my other takeaway is that there are going to be a lot of people looking for new numbers.  Perron is likely to get his usual #57.  Simon Edvinsson has been assigned #3 in development camp but it’s not his usual number so it probably goes to Maatta.  Chiarot and Kubalik have both been wearing #8, which is currently assigned to Jake Walman, so two of those three will need new numbers.  Additionally, Staal’s departure to the Florida Panthers opens up #18.  Will Lucas Raymond switch to his usual number or will Copp, who usually wears #9, take #18 instead? Or is that what Kubalik, who has worn it for Czechia, gets? 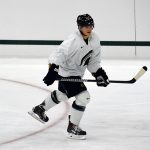 Thoughts on Torey Krug, Jacob Markstrom, and others as NHL free agency opens.

Thoughts on the Red Wings and rumored signings, hours before free agency opens.