As we wait to find out what moves the Red Wings have remaining before the NHL’s trade deadline, the team announced that forward Mitch Callahan has been called up from the Grand Rapids Griffins.

As many people have noted, the Wings are basically replacing Steve Ott (traded last night to Montreal) with the most Steve Ott-like player available in Grand Rapids.

Personally, I’d rather have seen Tyler Bertuzzi get another shot in the role, as I think he has more of a future in the Red Wings’ organization.  In fact, I’d forgotten that Callahan was even signed with Detroit right now (for some reason I thought he was on an AHL-only deal).

The call-up could be for just one game, though, as Gustav Nyquist will return from his suspension on Saturday in Edmonton. 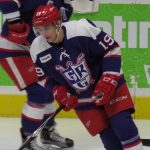 The Red Wings called up Tyler Bertuzzi and put Thomas Vanek on LTIR on Monday.