In the final day before the NHL’s trade deadline, the Detroit Red Wings made a move for additional forward depth in acquiring veteran Erik Cole from the Dallas Stars.

Cole comes to Detroit along with Dallas’ third-round pick in the upcoming NHL Entry Draft in return for prospects Mattias Backman and Mattias Janmark, as well as the Red Wings’ second-round pick. Dallas’ pick will be returned to them if the Red Wings make the Eastern Conference Finals.

Injuries to Johan Franzen and Darren Helm left the Red Wings short on forwards and would have pressed little-used veteran Daniel Cleary into service.

In a three-team deal on Tuesday, the Dallas Stars picked up Phoenix Coyotes captain Teppo Numminen. Dallas sent defenseman Darryl Sydor to the Columbus Blue Jackets, who then sent center Mike Sillinger to the Coyotes. The Stars also received a second-round draft pick from Columbus and sent a conditional pick to Phoenix.

The Detroit Red Wings acquired defenseman Marek Zidlicky from the New Jersey Devils in the final hours before the NHL's trade deadline on Monday. 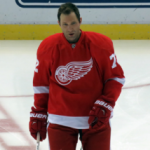 Detroit Red Wings forward Erik Cole will miss the remainder of the regular season and any possible playoff games.