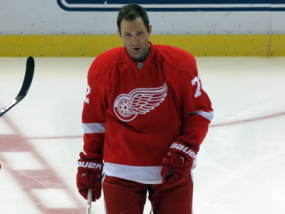 Detroit Red Wings forward Erik Cole will miss the remainder of the regular season and any possible playoff games.

Cole announced that doctors had recommended he shut down for several months at the conclusion of the Red Wings’ optional practice on Wednesday. He revealed that the injury that has kept him out of the lineup for two weeks is a spinal contusion.

“It stems back from my neck injury in 2006,” Cole said. “When I ran into the player in the Arizona game, I bruised my spinal cord. A spinal contusion is something that you have to let heal and obviously, it’s a pretty serious occurrence. Doctors feel I need to look out for my well-being as a person, not just as a hockey player.”

The Red Wings acquired Cole, 36, from the Dallas Stars in advance of the NHL’s trade deadline, hoping that he could help make up for the loss of Johan Franzen to a concussion. He had planned on returning to play before receiving news that not just his season but his career was at risk.

“When you have a contusion like that,” he said, “it will affect your nerves and it can affect your motor function, you can be a bit clumsy even just sending a text message or something like that. Right now, it’s just about being a healthy individual and worrying about my future and being able to play with my kids.”

In eleven games with the Red Wings, Cole compiled three goals and three assists. In 892 career games with Carolina, Edmonton, Montreal, Dallas, and Detroit, he totaled 265 goals and 267 assists for 532 points.