The Detroit Red Wings announced the signing of forward Daniel Cleary to a one-year contract on Thursday.

As per club policy, financial terms were not officially released. Reports state that the deal carries a base salary of $1.5 million with up to $1 million in performance bonuses.

Cleary, 35, played 52 games for the Red Wings during the 2013-14 season before a sprained knee kept him out of the final 22 games and all five of the team’s playoff games. He scored four goals and added four assists in that time.

He was expected to spend that campaign with the Philadelphia Flyers, having agreed to a three-year contract before spurning it on the eve of training camp, finally getting a $1.75 million offer from Detroit for one year with a verbal agreement to “take care of him” for 2014-15.

Cleary has spent the last nine seasons in Detroit after stints with the Chicago Blackhawks, Edmonton Oilers and Phoenix Coyotes. 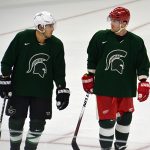 Cleary and Stuart Out for Preseason

On the morning he was expected to take to the ice for the first time as a Philadelphia Flyer, Daniel Cleary is instead en route to Traverse City to rejoin the Detroit Red Wings at their training camp.