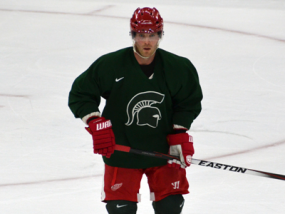 66
0
by Clark Rasmussen
In General News

The contract is reportedly a two-way deal for $950,000. The entire amount of the contract would come off of the Red Wings’ salary cap if Cleary were assigned to the Grand Rapids Griffins of the American Hockey League.

Cleary, 36, is coming off a season that saw him play just 17 games, scoring a goal and an assist while on a contract that paid him $2.5 million.

The deal is reportedly the result of a handshake agreement between Cleary and Detroit general manager Ken Holland two years ago. Supposedly, at the urging of then-head coach Mike Babcock, Holland promised Cleary a series of one-year deals to match the three-year offer he was rumored to be mulling from the Philadelphia Flyers. Such an agreement, however, is expressly forbidden by the collective bargaining agreement between the NHL and the NHLPA.

With the signing, the Red Wings now have 20 forwards who would have to clear waivers to be sent to the Griffins to start the season, though two of those players are Andy Miele and Eric Tangradi, who were specifically signed for Grand Rapids. Another, Louis-Marc Aubry, is unlikely to get a shot with the Red Wings. This leaves Cleary, Joakim Andersson, Landon Ferraro, and Mitch Callahan fighting for the final roster spots.