Since I wrote in January about the then-upcoming new logos and jerseys for the Dallas Stars, I figured I’d put something together now that they’ve been revealed.

Personally, I’m not a fan. The logo screams “arena football” to me and the fact that black was kept in the color scheme but gold was removed is disappointing. I don’t love the change to “victory green” or whatever their calling the new primary color but I loved their old green, so whatever.

I look at the new jerseys and I just see North Dakota. The entire identity seems derivative.

That said, I think they could have gone with some of the changes had they only kept the colors the same. 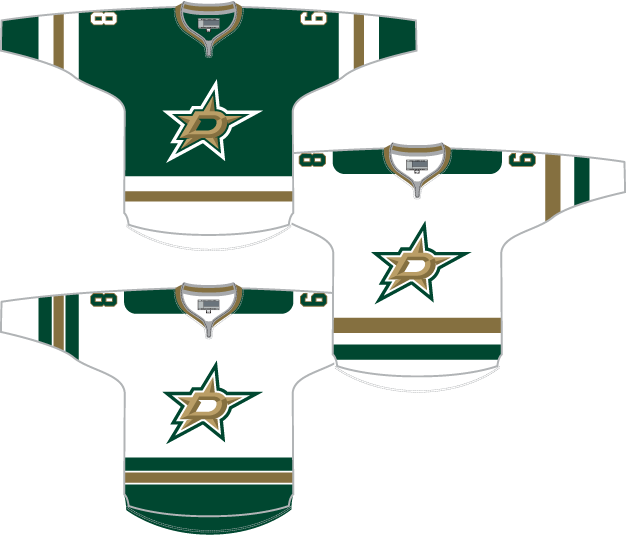 Had they dropped black, kept gold, and kept their previous green I think this set might have worked.

The first two are a simple palate-swap of their new jerseys, with gold replacing black in the striping pattern and grey removed. The third sees the light jersey based more on the dark jersey.

As with my previous concepts, my template is a little flawed so the collar isn’t displayed quite right. I’d expect the lace-up collars actually unveiled tonight to be used. I was also lazy and kept Jaromir Jagr‘s #68 on the mock-up from my previous design. It doesn’t mean anything.

I don’t entirely love these designs but I like them more than what the Stars actually went with. Not that it means anything.

On New Uniforms for the Dallas Stars