Sergei Bobrovsky of the Columbus Blue Jackets earned his first career shutout Saturday afternoon, leading his team to a 3-0 win over the visiting Detroit Red Wings in the first game of a weekend home-and-home series between the two clubs.

Bobrovsky stopped 30 shots in the effort, while counterpart Jonas Gustavsson made 21 saves on 24 shots against.

Cam Atkinson opened the game’s scoring with 6:14 left in the first period off a botched play behind the net by Detroit defenseman Niklas Kronwall. Kronwall attempted to complete a pass but whiffed on it as Matt Calvert pressured him on the forecheck. Calvert took the puck and sent it out to Atkinson all alone in front of the net for a shot past Gustavsson.

Jack Johnson made it 2-0 at 5:12 of the second period when his blast from up high found its way through traffic and past Gustavsson for a power play goal.

Another botched play behind the net gave the Blue Jackets their third goal. Brendan Smith passed it along the end boards to Kyle Quincey but the puck bounced off the back of Quincey’s skate and right to Ryan Johansen, who sent it out to Nick Foligno to snap past Gustavsson.

Jared Boll thought he had made it 4-0 early in the third period but his apparent goal was waived off as it was ruled that Gustavsson had control of the puck on a delayed penalty to Detroit.

The two teams wrap up their home-and-home series on Sunday in Detroit. 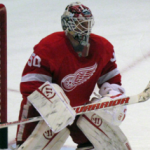 Just a day after a surprise start in Boston in which he stopped 28 of 30 shots against, Detroit backup netminder Jonas Gustavsson got the nod again and stopped 36 of 37 shots to lead the Red Wings to a 2-1 win over the Columbus Blue Jackets.

Coming off a 4-1 loss to the Montreal Canadiens on Sunday, the Detroit Red Wings rebounded with a 5-0 win over the Columbus Blue Jackets Tuesday night.