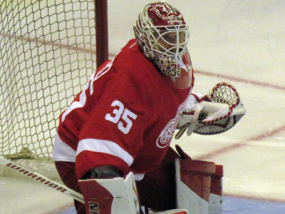 Both Detroit goallie Jimmy Howard and Columbus netminder Sergei Bobrovsky earned shutouts on Tuesday night, but Bobrovsky’s Blue Jackets came away the winners as the Red Wings fell in the shootout.

Howard stopped all 29 shots he faced through regulation and overtime. Bobrovsky was perfect on thirty Detroit chances prior to the shootout.

Looking to shake their shootout bad luck, the Red Wings opted to have Columbus go first in the tiebreaker, and the gambit paid off in the first round with Howard stopping Cam Atkinson and Pavel Datsyuk beating his countryman Bobrovsky.

Ryan Johansen beat Howard in the second round while Gustav Nyquist rang a shot off the crossbar.

Boone Jenner put the Blue Jackets in the lead and Henrik Zetterberg never really got a shot off, giving Columbus the win.

The Red Wings are now 1-6 on the season in the shootout, with their only win coming against the hapless New Jersey Devils.

Detroit is back in action on Friday when they host the New York Islanders.