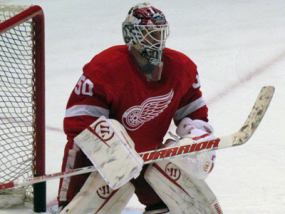 85
0
by Clark Rasmussen
In Game Recap

Just a day after a surprise start in Boston in which he stopped 28 of 30 shots against, Detroit backup netminder Jonas Gustavsson got the nod again and stopped 36 of 37 shots to lead the Red Wings to a 2-1 win over the Columbus Blue Jackets.

It marked the first back-to-back wins for Gustavsson since January 23 and 24 of 2012, when he was with the Toronto Maple Leafs.

Cam Atkinson’s power play goal at 7:48 of the second period was the only shot to get past Gustavsson on the night. Atkinson went end-to-end on a rush, racing around defenseman Danny DeKeyser to get a shot from in close in on Gustavsson, who made the initial stop before Atkinson swatted home the rebound to briefly tie the game.

The Red Wings would regain the lead 3:26 later with a power play goal of their own. After getting knocked down in front of the net on a slew-foot by Fedor Tyutin, Todd Bertuzzi got back up to get a backhand chop in at the rebound of a Henrik Zetterberg shot. The puck bounced between Columbus goalie Sergei Bobrovski’s pads with Pavel Datsyuk also there whacking at it.

Daniel Alfredsson’s first goal as a Red Wing had opened the scoring at 5:05 of the first period. Driving through the slot, Zetterberg attempted to pass off to Datsyuk but the puck was blocked. Datsyuk got to it and poked it over to Alfredsson in the right faceoff circle for a slapper past Bobrovski and a 1-0 lead.

Each team scored once on the power play. Detroit had four chances with the extra attacker to Columbus’ three.

Bobrovski, the reigning Vezina Trophy winner as the league’s best goaltender, made 30 saves on 32 shots against.

The game was Gustavsson’s first career regular season start at Joe Louis Arena… During the game it was announced that injured forward Darren Helm was assigned to Grand Rapids for a conditioning stint. He is expected to play for the Griffins in their games this weekend before returning to Detroit on October 26th against the New York Rangers.