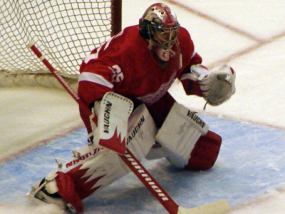 Howard kept Columbus off the scoreboard through the first two periods, over which time the Red Wings were outshot 25-20 and the Blue Jackets had five power plays. He also stopped Jared Boll on a penalty shot at 8:53 of the second period.

The Red Wings opened the scoring on an odd-man rush at 7:04 of the second period. Todd Bertuzzi carried the puck down the right wing boards as Valtteri Filppula and Johan Franzen joined him on a three-on-one. Bertuzzi sent a pass through defenseman Anton Stralman to Franzen for a quick snap shot into the open side of the net.

Valtteri Filppula made it 2-0 at 8:06 of the third, beating Columbus goaltender Steve Mason from down low off pass from Brad Stuart on the power play.

Antoine Vermette beat Howard on a backhand rebound chance 59 seconds later to pull the Jackets to back within a goal but Columbus couldn’t even it up.

Mason finished the night with 30 saves on 32 Detroit shots.

The Red Wings were one-for-three on the power play for the night. Columbus went scoreless in five tries with the man-advantage.

The two teams will meet again on Sunday in Detroit.

Mike Modano left the game in the third period with a cut on his arm. His status for Sunday’s rematch was not immediately known.