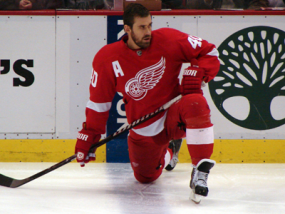 The victory snapped a three-game losing streak and put the Red Wings back on top of the Central Division, two points ahead of the idle St. Louis Blues.

The game was tied at a goal apiece heading into the third but Derek MacKenzie put the Blue Jackets up by a goal, scoring on a shorthanded break with a shot that Detroit goalie Joey MacDonald got most of but not enough, as the puck slipped under his arm and into the net at 2:13.

Niklas Kronwall countered on the same power play. After getting the puck at the top of the left faceoff circle, Kronwall drove down to the left side of the slot and backhanded a shot through Columbus netminder Curtis Sanford to tie things up at 3:43.

At 8:26, Henrik Zetterberg put the Red Wings in front, flinging a shot from an acute angle in the left corner through a gap to Sanford’s short side.

Just 49 seconds later, Jan Mursak scored his first goal of the season on a spinning rebound chance from the top of the crease, beating a sprawling Sanford to make it 4-2.

Valtteri Filppula rounded out the scoring with 6:08 left, corralling a bouncing puck in front of Sanford and snapping a shot past him.

Johan Franzen had opened the game’s scoring at 4:08 of the first period, grabbing the rebound of a Jakub Kindl shot and putting it past Sandford from right in front just as a Columbus penalty expired.

Columbus would respond 2:47 later, when Rick Nash drove to the net from along the goal line and was pushed into MacDonald by Kronwall, while Brad Stuart’s attempt to clear the puck from the crease slipped through MacDonald.

MacDonald finished the night with 28 saves on 30 shots for his seventh consecutive win. Sanford made 20 saves on 25 shots.

Each team scored a power play goal, with the Red Wings having six chances with the extra attacker and the Blue Jackets having five.

The Red Wings are next in action on Friday when they host the Minnesota Wild.

Detroit was without defenseman Nicklas Lidstrom (foot), Kyle Quincey (groin) and Jonathan Ericsson (wrist) for the game. Jakub Kindl was inserted back into the lineup while both Brendan Smith and Doug Janik were called up from the Grand Rapids Griffins to play… The Red Wings were also without Pavel Datsyuk (knee) and Patrick Eaves (concussion).