Mursak, 25, has appeared in only two games this season for the Red Wings. During the season opener against the St. Louis Blues he suffered a shoulder injury that kept him out of the lineup until Thursday’s loss to the Columbus Blue Jackets.

Mursak spent three full seasons with the Griffins prior to his promotion to the Red Wings, plus an additional six games in a conditioning stint last season. In 190 total AHL games, he has 39 goals and 48 assists for 87 total points.

Mursak was originally selected by the Red Wings in the sixth round of the 2006 NHL Entry Draft, 182nd overall.

Veteran forward Mikael Samuelsson cleared waivers at noon on Sunday and has been assigned to the Grand Rapids Griffins, the Detroit Red Wings announced. 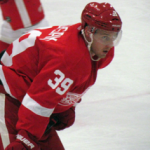 The Detroit Red Wings placed forward Jan Mursak on waivers on Friday. The NHL's other 29 teams now have until noon on Saturday to place a claim.