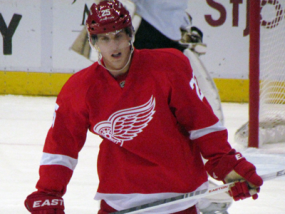 Detroit Red Wings forward Cory Emmerton cleared waivers on Monday, paving the way for him to be sent down to the team’s American Hockey League affiliate, the Grand Rapids Griffins.

With Darren Helm injured, Emmerton had been expected to start the season as the Red Wings’ fourth-line center but he was outplayed in training camp and throughout the preseason by prospects Luke Glendening and Riley Sheahan, making him expendible.

Emmerton, 25, was originally drafted by Detroit in the second round (41st overall) of the 2006 NHL Entry Draft. He spent four seasons with the Griffins, playing in 217 games and scoring 34 goals and 77 assists before earning a spot with the Red Wings during the 2011-12 season. In 121 career games with Detroit he has 12 goals and seven assists in a checking-line role.

With Emmerton in the AHL, his entire $533,333 salary cap hit comes off the Red Wings’ books.