Chris Osgood stopped 22 of 23 Columbus shots, keeping the Red Wings in the game after a slow start.

After outshooting Detroit 8-3 in the first period, the Blue Jackets opened the game’s scoring on a power play at 7:05 of the second, with Manny Malhotra banging a loose puck past Osgood.

Zetterberg would begin his run at 6:43 of the third period on a rush from his own blue line. He came down the left wing and cut to the middle before crossing the Columbus blue line and splitting the defense, poking the puck between the pads of Fredrik Norrena.

With just 1:54 remaining and the Red Wings on a power play, Nicklas Lidstrom fired from the blue line. It was deflected to Pavel Datsyuk at the edge of the slot, who slowed it up and threw it to the left circle where Zetterberg put a shot into the open side of the net.

Zetterberg completed his hat trick just 35 seconds later, stealing the puck at center ice and racing in alone on Norrena. The Columbus netminder came out to challenge and Zetterberg skated around him, putting it into the empty net.

Norrena finished the night with 24 saves on 27 shots.

Both teams scored one power play goal. Columbus had seven chances with the extra attacker and Detroit had five.

The Red Wings are back in action on Thursday when they visit the Nashville Predators. 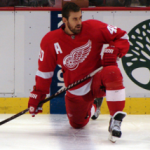