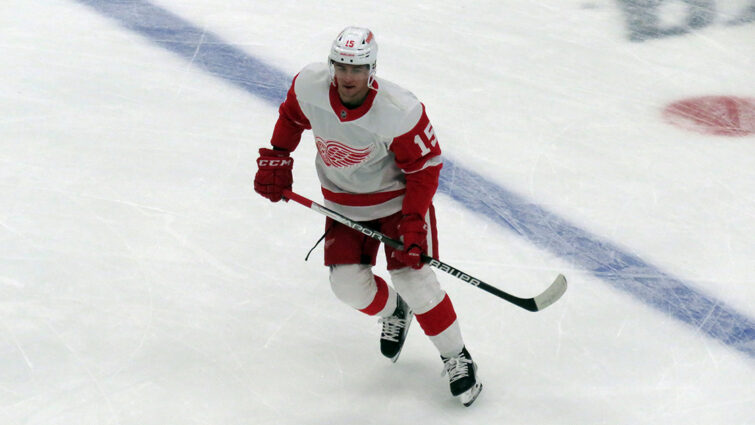 Detroit Red Wings forward Jakub Vrana cleared waivers on Wednesday, after having unexpectedly been placed on them on Tuesday.

He was then immediately assigned to the Grand Rapids Griffins – where he’d already been playing on a conditioning loan – to make room for Robby Fabbri’s return from injury on the Detroit roster.

What we know is that the Red Wings needed that roster spot for Fabbri.  We also know that – for whatever reason – the team was willing to risk losing Vrana for nothing.

There is certainly a way to look at this and assume that the Red Wings and Vrana are done with each other.  Vrana being on waivers could easily be turned into “Yzerman tried to give him away for free.”  There’s already Twitter-based speculation that now the Wings are free to trade him (retaining salary in the process) to a team that wants him to have him get back up to speed in the AHL.

There weren’t a lot of teams who had the cap space to claim Vrana today.  I called out Chicago yesterday (and I’m still surprised they didn’t do it) as one team that could make the claim.  It’s entirely possible that Chicago and Anaheim and Buffalo and Arizona weren’t interested but twenty other teams who couldn’t afford Vrana’s contract were.

It’s also entirely possible that, just like the potential trade partner who would want Vrana to have time to get up to speed in the AHL, the Red Wings themselves don’t think Vrana will be ready to play before the end of his conditioning loan.  If that is the case, it would appear that Red Wings general manager Steve Yzerman was willing to gamble on losing Vrana entirely in order to enable the extra time with the Griffins – a gamble that worked.

I don’t buy that the Wings and Vrana are certainly done.  If Yzerman had simply wanted to dump Vrana, he could have placed him on waivers immediately upon his return to the team instead of waiting until yesterday.  If Vrana had done something to make the Red Wings not want him anymore, it seems strange that they would then assign him to spend time with the organization’s prospects in Grand Rapids.

That said, it’s hard to see a path back to Detroit for Vrana, given the players the Wings chose not to waive or demote to make room for him.  Additionally, Vrana’s value changed today.  A trade that didn’t work on Monday might be an option now.

We know that Vrana is still a member of the Red Wings’ organization but many of the questions raised yesterday remain.