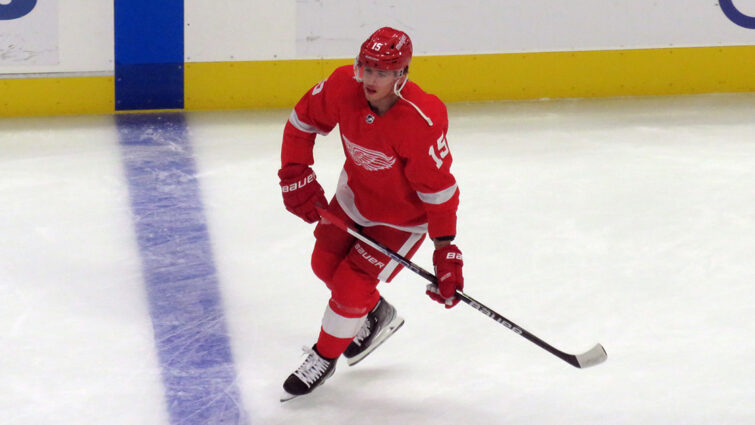 Jakub Vrana (DET) has been placed on waivers.

The Red Wings were coming up against a deadline to make a roster move.  With Robby Fabbri set to make his season debut against the New Jersey Devils tomorrow, someone would have to come off the roster to make room for his return.  Detroit has three waiver-exempt forwards but head coach Derek Lalonde implied that Joe Veleno, Elmer Soderblom, and Jonatan Berggren had secured their lineup spots.  This seemingly left Adam Erne – who skated on the “fifth line” during today’s practice – or Gustav Lindstrom as waiver candidates.

Instead, the team waived Jakub Vrana, who is currently with the Grand Rapids Griffins in an effort to get back into game shape after missing most of the first half of the season while in the NHL/NHLPA Player Assistance Program.  Vrana has zero points in three games with the Griffins and counts towards the Red Wings’ roster while on his conditioning loan.

There are reasons that this move might make sense.

Perhaps something has soured between the team and the player.  Vrana may have demanded to be moved or something may have happened that made the Detroit organization want him out of the dressing room.  If the goal is to move him it would seem that a trade would be better for the Red Wings but making him available to all teams via waivers also accomplishes it.

Perhaps the Red Wings think Vrana will need more than another week to get into NHL game shape and would have to waive him anyway upon the conclusion of his conditioning stint.

Perhaps it’s some of the “four-dimensional chess” that Detroit general manager Steve Yzerman is often credited with playing.  It’s easy to assume that he knows something the fans don’t that explains the move.  Of course Yzerman knows more than the fans.  And maybe one of the things he knows is that there’s no team who would claim Vrana, whether it be due to his contract or his health or some combination of a number of factors.

There are also a lot of reasons, on the surface, that this looks like a bad move.

The Red Wings are risking losing a top-six winger for nothing.  A player who was expected to be important for them this season.  Maybe he makes it through waivers but maybe he doesn’t.

They’re also doing this to preserve their Magnus Hellberg experiment in goal.  Because this isn’t a problem if the team isn’t trying to carry three goalies.  Fabbri’s roster spot is just as open if Hellberg or Alex Nedeljkovic is waived.

And it should be noted that they don’t even have to waive anyone right now.  Yes, Veleno and Soderblom and Berggren have earned their roster spots, but they could be temporarily demoted if it was “just” a matter of not having enough time to make a better move.

They’re risking losing Vrana in order to not have to risk losing Lindstrom or Erne or Hellberg or Nedeljkovic and to not suffer the inconvenience of not having Veleno and Soderblom and Berggren available.

It’s a gamble.  I like gambling.  I think it’s fun.  But I also go in expecting to lose.  I’m looking at the salary cap, seeing who has space for Vrana’s $5.25 million hit, and the Chicago Blackhawks and Anaheim Ducks jump out at me.  If I’m one of those teams, in the middle of a rebuild, at the bottom of the standings, with torn-down rosters and cap space to spend, I jump at the chance to make a claim.  I claim him for (virtually) free, give him a year to re-establish himself, and then flip him as a pending unrestricted free agent at the 2024 trade deadline for future assets.  So I expect to lose Vrana.

But maybe Yzerman knows something.  If Vrana clears waivers tomorrow, we’ll likely never know what he knew that made him take that risk.  And if Vrana is claimed we’ll probably also never know what led him to gamble and lose.