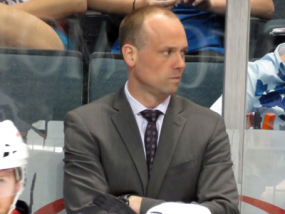 The Detroit Red Wings announced on Tuesday the signing of head coach Jeff Blashill to a contract extension.

Blashill’s contract with Detroit had been set to expire this offseason.

In six seasons as the Red Wings’ head coach, Blashill has taken the team to the playoffs only once.  His overall record with Detroit is 172-221-62.

Notably, the length of the extension was not announced.

The team also revealed that assistant coach Dan Bylsma will not return to the team.

Blashill hasn’t exactly had much to work with as far as talent on the roster goes during his time in Detroit, so I understand the idea of keeping him to see what he could do with a more well-assembled group of players.

Perhaps the thinking is that a different coach couldn’t do better with the players Detroit has available.  That may also be true and is a little harder to counter.

I don’t particularly think it was necessary to make a change.  That said, it feels a lot like, over the years, the organization has been content to trot out the same old players, the same old coaches, and hope for something to change.  Swapping out Blashill would have been a sign that these losses, no matter how necessary for draft capital and the rebuild, are unacceptable over the long-term.

Thoughts on the 2021 Season