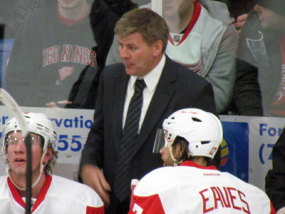 99
0
by Clark Rasmussen
In General News

Peters had been with the Red Wings for three seasons, having joined the club alongside Jeff Blashill when the pair were hired to replace the departing Paul MacLean and Brad McCrimmon.

Thus far the Red Wings have retained the services of Tom Renney, their other assistant coach. Peters’ replacement will be named later in the summer.