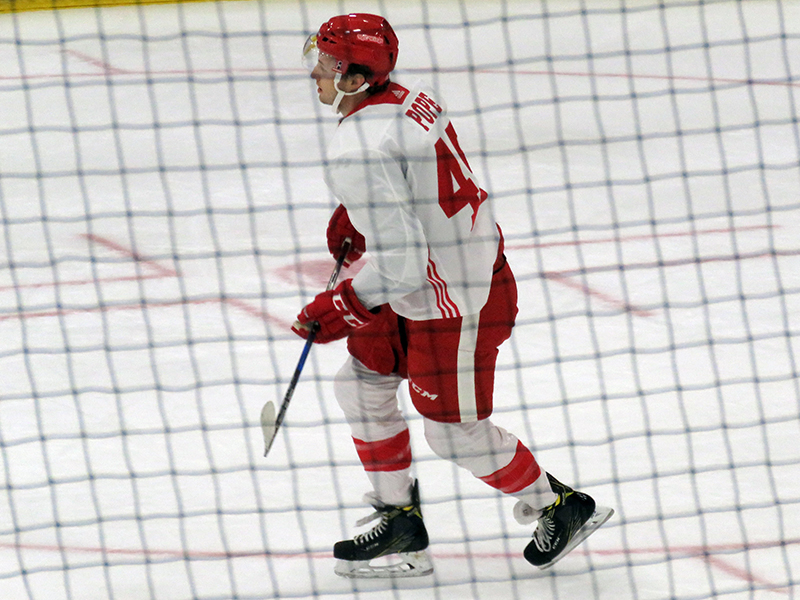 210
0
by Clark Rasmussen
In General

The Red Wings released their roster for the 2018 Prospects Tournament in Traverse City today, which means we have new jersey numbers to over-analyze.

As always, the Red Wings’ official stance is that camp numbers are meaningless, so this all needs to be taken with a grain of salt.  But – as I always say – there are a lot of times that we can read something that hasn’t officially been announced from these choices.

There are only six players who appeared at the Red Wings’ development camp in June who will return with different numbers.

Kaden Fulcher, who has worn a slew of numbers in various camps with the Red Wings, switches from the #60 he had at development camp to the #36 that was worn by Filip Larsson.  Meanwhile free agent tryout Justin Fazio, a late addition in June, goes from #30 to #68.

Those are easy to read nothing into as the Red Wings generally assign #36, #38, and #68 to their prospect goalies.

Grand Rapids Griffins signing Jordan Topping takes the #53 that had been worn by Kaspar Kotkansalo, which probably just means that Kotkansalo won’t be in Traverse City this year and doesn’t need that number.

Free agent invitee Nicolas Guay switches from #20 to the #76 last worn by Chase Pearson.  I think this means that one of the Wings’ Grand Rapids-bound summer signings will wear #20 in camp (or on a call-up) but I don’t know which one.

Finally, there’s David Pope and Christopher Ehn.  Pope lost his #11 to Filip Zadina for development camp this year and wore #45 there but will wear #58 (worn by Griffins forward Luke Esposito last year).  Ehn had worn #45 at last year’s development camp and will now wear the #70 that Jack Adams wore in June.

Both players switching numbers seems to clear the way for goalie Jonathan Bernier to wear his usual #45.  Bernier was originally listed on the Detroit roster with that number but currently does not have a number assigned.

Speaking of July 1 signings, it looks like Thomas Vanek will wear his usual #26 this time around with the Wings.  That’s the number he’s listed with on the team roster but he wore #62 last time around as #26 was taken by Tomas Jurco.  Vanek’s former #62 was worn by Trevor Hamilton in development camp and Hamilton will keep it for the prospects tournament, so it doesn’t look like Vanek needs it.