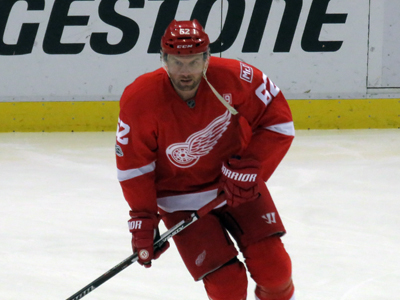 After it was reported this morning that the two sides had reached a deal, the Red Wings officially announced that they’re bringing back forward Thomas Vanek.

Unless the Red Wings move a forward, I don’t think they’re leaving enough roster spots open for Michael Rasmussen or Filip Zadina or anyone else to make a push in training camp.  And, as I don’t think this team is competing for the Cup any time soon, I’d rather see the kids out there than retreads.

That said, at least it’s a one-year deal, so he can be flipped (again) at the deadline if the Wings are, in fact, out of it by then.

I guess the next question about Vanek is if he wears the #62 he had during his first run with the Wings or takes his usual #26.

Update, 12:25 PM: So much for easily flipping Vanek at the deadline:

A lot of twitter-commentary out there that Vanek will be dealt again at the trade deadline in 2019. His new deal w/@DetroitRedWings contains a full NTC as protection, so that won’t be happening unless Van chooses to waive.

I suppose I shouldn’t be shocked.  Holland just can’t help himself from giving out random NTCs to veterans.  I suppose we can always hope that, if necessary, Vanek will, in face, waive it.