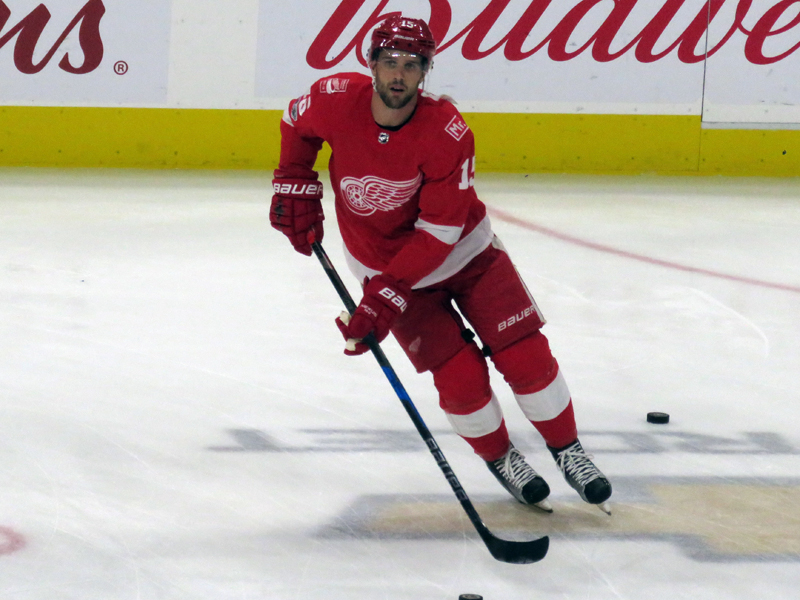 A day after agreeing to terms on a new contract with restricted free agent forward Andreas Athanasiou, the Red Wings cleared salary cap space for his deal by trading defenseman Ryan Sproul and forward Riley Sheahan in separate deals.

The #RedWings have traded Riley Sheahan and a 2018 5th round pick to Pittsburgh for Scott Wilson and a 2018 3rd round pick. pic.twitter.com/yjwnuCv1zE

The Sproul deal is strictly to clear up the roster spot he was holding down in Grand Rapids.  With Sproul on the Griffins, prospect Filip Hronek was stuck as the team’s seventh defenseman, only playing one of their first five games (and even then it was a night they went with seven defensemen and eleven forwards).  Puempel is a former first-round pick from the Ottawa organization but in all likelihood has no future in Detroit.

Sheahan had long been rumored to go to the Penguins, as they were looking for a third-line center.  The original deal was supposedly Sheahan for defenseman Derrick Pouliot but Pouliot was dealt to the Vancouver Canucks at the start of the season.  Wilson is a better pick-up for the Red Wings as – if nothing else – he doesn’t contribute to the defensive logjam across the organization.

It appears that Wilson will remain with the Red Wings.  If that’s the case, David Booth could be assigned to the Griffins.  He will not need to clear waivers as he did that to start the season.

I look at it as this…  Sproul for Puempel clears the logjam a bit and that’s good, though I expect Vili Saarijarvi to remain stuck in Toledo because he should play there instead of sitting as the Griffins seventh defenseman.  Sheahan was the piece on the existing roster that could bring back the most in trade and still clear cap space for Athanasiou, so that’s a good deal, too, no matter what happens with Wilson.

Not a bad set of deals for Ken Holland.


On Hicketts, DeKeyser, and Kronwall