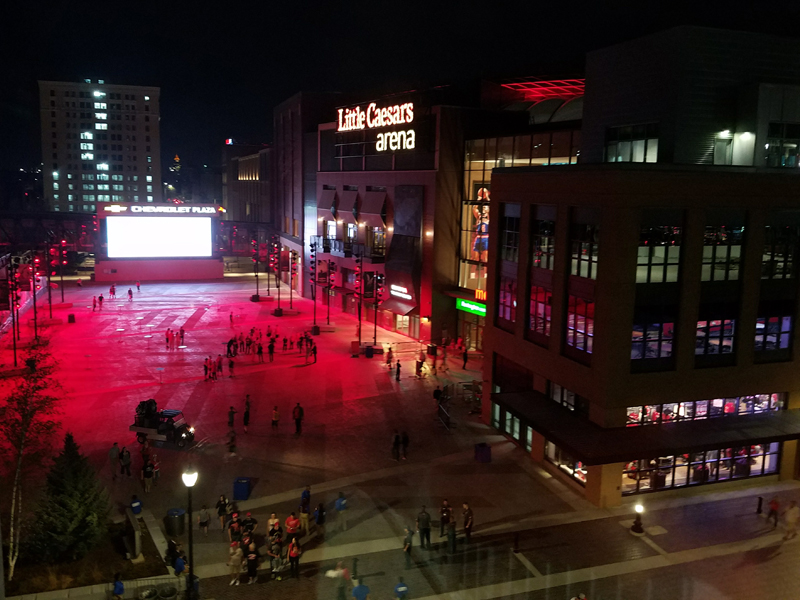 Saturday’s 5-1 exhibition win over the Boston Bruins marked the Red Wings’ opening of Little Caesars Arena.  It may not count as anything in the record books but it was the first chance to see what a Red Wings’ hockey game at the new arena looked like.

As such, here are some of my thoughts about Little Caesars Arena…

Parking around the arena is relatively awful in comparison to around the Joe.  More specifically, traffic getting in and out is.  The JLA parking structure was something of a nightmare but at least there were surface lots nearby that you could get out of and on your way quickly.  At LCA, the surface streets were backed up all around the arena.  I’m sure it didn’t help that a Tigers game was getting out at about the same time as the Wings were wrapping up, but the Wings game wasn’t exactly a sellout (no matter what they announced) so there’s some trade-off there.

The arena felt quiet.  Maybe that’s because it wasn’t packed.   Maybe it’s because the game wasn’t great.  Maybe it’s because I was tucked up in the last row of the upper bowl behind the gondola.  Maybe it was loud but just felt quiet.  Or maybe it really was quiet.  I don’t know.  That there were only one or two sustained “Lets Go Red Wings” chants could point to it just being a quiet night.  Or the arena killing sound could be why chants didn’t pick up.

The center ice sections of the lower bowl are now club seating so good luck getting down there if you’re someone who likes watching warmups.

I’ve heard a lot of people raving about the food choices but as someone who doesn’t go to an arena to eat…  Meh.  The food is expensive, though.  The “$5 for a bottle of water” kind of expensive.

My seats were in the last row of the upper bowl and they were still pretty fantastic.  I think I even managed to get some good player photos from where I was, which is better than I can say about Tampa or Columbus.

There’s still a ton of construction going on around the arena.  That’s going to be happening for awhile.  Even with the arena itself done, we’re not seeing anything close to a finished product yet.

Overall, it felt kind of like a road game.  I think that’s to be expected and is a feeling that will go away with time.

Thoughts on Athanasiou’s (Lack Of) Contract


Michael Rasmussen and The Plan