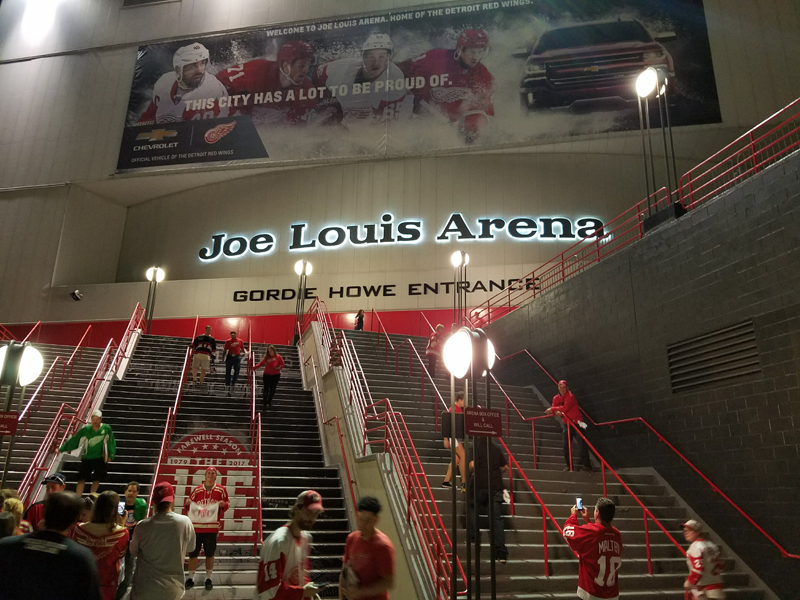 It’s the morning of the last day of Red Wings hockey at Joe Louis Arena and I can’t sleep.

Recovering from a concussion, I’m supposed to sleep as much as I can, and I’m definitely not supposed to be on my computer, but I’ve got memories and emotions swirling around in my head.

I never had season tickets at the Joe so I wasn’t there for a lot of the big games.  But there are memories that are big in my mind.

Growing up, before the Red Wings had won any Cups and banner raisings became common, I always said that I wanted to be there when Steve Yzerman’s jersey number was retired.  It was never a question of whether it would be, for me, and I wanted to be sure that I would be there.

Fifteen years after that declaration, I was able to see that happen live.  The ceremony, hosted with a sort of breathless wonder by Darren Pang, attended by decades of Red Wings dignitaries, is probably my favorite Joe Louis Arena event.

I’ve never seen the Red Wings win the Cup at the Joe.  Not strictly, at least.  In 1998, my parents packed all of us in the family minivan and drove in for Joe Vision for Game Four of the Stanley Cup Finals.  A packed arena watched the Red Wings win a game that wasn’t even being played there but celebrated as if it had been.

The things that stick with me most, though, aren’t necessarily the events I was there for, or even good moments.

My cousin, a couple friends of his, and I were at Game Seven of the 2009 Stanley Cup Finals.  We parked at the MGM Grand and walked down to the arena.  By the time the game was winding down, they’d all gone back to the casino, certain that it would not end well.

They ended up being right, of course, and as I walked down Third Street by myself after the game, I called my then-father-in-law, who was also a Red Wings fanatic.

The pause as he tried to figure out how to respond to that will always stick with me.

I mentioned in the Puck Daddy roundtable that will be published this morning that I was at Game Two of the 1997 Western Conference Semifinals, a triple-overtime win over the Mighty Ducks of Anaheim.  Another of my favorite JLA memories is attached to that game.

My uncle’s business split a suite and for that game, he had invited the whole family in.  For some reason, we were running late.  The game had already started by the time we were on Rosa Parks Blvd. headed to Jefferson Ave.

There was a long line of cars waiting to get into the parking garage and we were missing more and more of the game.  As I agonized over that, my dad handed out tickets and told the four of us kids we could jump out and go ahead if we wanted.

I remember hitting the ground running, sprinting down Jefferson, blowing through the suite ticket entrance and racing up the stairs rather than waiting for the elevator.

I ran into the suite, ignoring my aunt, and stepped out onto the arena proper just as the game’s opening goal was scored.

I’ve had a lot of fun at the Joe.  I’ll miss it.  But nothing will take away these memories.


Saying Goodbye to the Joe