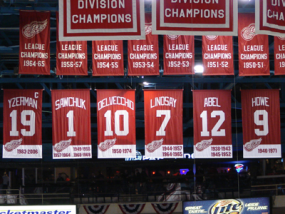 Looking Up at the Joe Louis Arena Rafters

I’ve been working on a new feature for DetroitHockey.Net on and off for a couple months now and maybe it’s appropriate for it to launch just two days after a group of fans had to be removed from the Joe Louis Arena rafters.

Back in October I got an email from reader Adam Pavlik with an interesting note about the rafters at the Joe. Adam’s question made me realize that despite my own interest in the Red Wings’ banners and their placement in the rafters, I had never documented any of that information.

It led me to create a new part of DetroitHockey.Net, a Joe Louis Arena rafter diagram, detailing the position of each Wings’ banner.

That diagram is correct as of November, the last time I was at the Joe personally. The thing is, had I made it based on a trip to the arena last season there would have been something very interesting on it.

The Red Wings, by my count, have 66 banners hanging in their rafters. There are two more for College Hockey at the Joe but I don’t count those. Last year they had 65, adding a Central Division Championship and a Campbell Bowl banner over the summer.

Do the math and you see that while they raised two banners they also took one down.

What I had never noticed before, and apparently neither had anyone else in the Red Wings organization, is what Adam had emailed me to ask about. Why was there a banner for the 1933-34 League Championship hanging at Joe Louis Arena?

That banner was there when I first started taking pictures of the rafters and was still there in last spring’s Stanley Cup Finals.

The problem is that in 1933-34 the Toronto Maple Leafs were the NHL’s regular season champions.

For at least ten years (I have to imagine longer), the Red Wings flew a banner that they never won.

Adam contacted the Red Wings organization looking for answers about the banner but none were forthcoming. That it no longer hangs at the Joe is all of the acknowledgement that I expect from the team’s front office.

I could spend a whole other post on what I think should be hanging from the rafters, from team accomplishments to retired numbers. That’s all opinion.

That the Red Wings were honoring an accomplishment that never happened is a fact. Unfortunately, we may never know why.

Update, 11:20 AM, 1/26: Adam has corrected me to note that he did get a response from the Red Wings organization, thanking him for pointing out the out-of-place banner. They did not, however, explain why it was there.