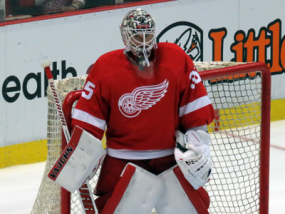 Morning After: Mistakes, Instigators, and Howard

A week and a half ago I wrote about how Ryan Sproul made a mistake that directly led to the overtime game-winning goal for the Florida Panthers.  While I didn’t like the mistake, I was glad that Sproul was out there to make it.  I saw it as a sign that he was getting his chance, that the Red Wings were willing to suffer through some growing pains.

The next game, Sproul was on the ice for three of the Penguins’ four third-period goals as Pittsburgh rallied to win. The only mistake I see on those plays is his failure to cut off a cross-crease pass on the third.

He hasn’t played since, having been replaced by Brian Lashoff (of all people) and then Alexey Marchenko, having returned from injury.

Maybe I was wrong about him getting his shot.  Or maybe I’m missing a mistake that earned him a spot in the pressbox.  Xavier Ouellet has been playing while Sproul sits and I think Sproul has been better this season than Ouellet.  But what do I know?

Speaking of Ouellet, he took an insigator minor and a misconduct for jumping Michael Raffl last night after Raffl hit Steve Ott.  I think it’s hilarious that Ott, the guy who was brought in to stand up for guys, needed someone to stand up for him.

While Matt Shepard was quick to throw praise to Ouellet for fighting on behalf of the guy who usually sticks up for everyone else, I think that was a really dumb move.  Midway through the third period of a tied game you put your team down a man for two minutes and short a defenseman for effectively the rest of the game.

There’s standing up for your teammate and there’s making a smart play.  Sometimes that overlaps.  This time it didn’t.

Jimmy Howard didn’t deserve that loss, but that’s not the first time it’s happened this season.  It’s nothing new that his goal support has been pathetic this season and while a 1-0 loss (even in overtime) doesn’t help the Red Wings much, his play in those games does.

Howard, in all likelihood, will not be a Red Wing next season.  Vegas should claim him in the expansion draft if he’s available.  If they’re not right now, the team should try to trade him at the deadline.

Who knows what kind of market there will be but a team like the Calgary Flames may decide that the Brian Elliot experiment was a failure and, as they scratch for a playoff spot, they need someone more reliable than career backup Chad Johnson.

My point being that Howard’s play makes it easier to trade him, and trading him means that they’re not only free of his contract but also the player who Vegas ends up taking instead of Howard.

This is nothing new, of course.  It’s just worth mentioning that Howard’s play might make it a little more possible to pull off.