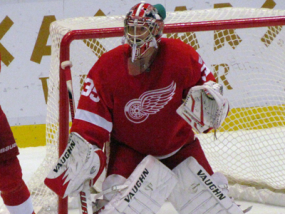 102
0
by Clark Rasmussen
In Game Recap

With the loss, Detroit falls to fifth place in the Western Conference standings, one point behind the fourth-place Predators, who have a game in hand.

After the first half of the game was scoreless, Nashville’s Gabriel Bourque opened the scoring with 6:55 left in the second period. Bourque flipped a shot from the top of the right faceoff circle through traffic and past Howard to give the Predators the 1-0 lead.

Francis Bouillon made it 2-0 with just 33 seconds left in the period when he picked up a loose puck and snapped it past Howard after a net-front scramble.

At 2:40 of the third period, Alexander Radulov was left all alone at the top of the crease to take a feed from Andrei Kostitsyn and punch it past Howard.

Jiri Hudler scored Detroit’s lone goal with 3:03 remaining, knocking the puck past Nashville golie Pekka Rinne from the side of the net on a pass from Henrik Zetterberg.

Shea Weber wrapped up the scoring with an empty-net goal in the game’s final minute.

Neither team scored a power play goal on the night, with Detroit having three chances and Nashville having two.

Howard made 23 saves on 26 shots against in his return from a groin injury. Rinne stopped 31 of 32 shots.

The Red Wings play again on Sunday when they host the Florida Panthers.

Detroit’s healthy scratches were Kyle Quincey on defense and Jan Mursak up front.