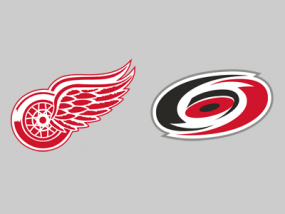 Less than twenty-four hours after a come-from-behind win over the New York Rangers in Detroit on Saturday, the Red Wings are on the road today, visiting the Carolina Hurricanes.

The Hurricanes feature some familiar faces for Detroit, as former assistant coach Bill Peters is their head coach now and waiver claimee Andrej Nestrasil is still in the Carolina lineup (wearing #15 rather than the #49 he had with the Red Wings).

The Wings will be going with a different lineup in Raleigh than they used against the Rangers, as Petr Mrazek gets the start in goal. Daniel Cleary and Brian Lashoff will also rotate in but Mike Babcock said he wouldn’t decide who they would replace until game time.

Stupid stat of the day: Cleary will make his first appearance since switching back to #11. Since 2000 the Wings have scored at least five goals (and won) in games where one of their players switches back to a number they had previously worn for the club.