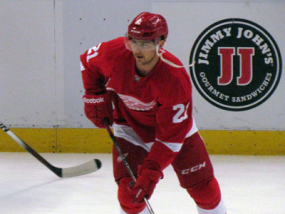 The Detroit Red Wings scored twice in the final seven minutes on Thursday, rallying from down 3-2 for a 4-3 victory in Winnipeg against the Jets.

Justin Abdelkader started things off at the 13:00 mark of the third period. Brian Lashoff’s shot from up high deflected off Abdelkader and pinballed between him and Winnipeg goalie Ondrej Pavelec, trickling across the goal line as both dove for it.

Tomas Tatar gave the Red Wings the lead 2:10 later with his second goal of the night. Abdelkader drove down the left wing and cut to the net before passing it off to Tatar alone at the top of the crease to bang it past Pavelec.

The Jets had opened the scoring just 2:15 into the second period, with Evander Kane’s backhand pass from the side of the net reaching Dustin Byfuglien in front for a quick shot past Detroit netminder Petr Mrazek.

At 9:32 of the period, Adam Lowry made it 2-0. Michael Frolik carried the puck into the Detroit zone on a three-on-two, looking to pass across to Lowry before dropping it off to Mark Scheifele. Scheifele’s shot from the slot was partially blocked but the bouncing puck came to Lowry to bat past Mrazek.

The Red Wings responded just thirty seconds later, as Tatar picked off an attempted clearing pass at the top of the left faceoff circle and stepped up towards the slot, ripping a shot past Pavelec to get Detroit on the board.

Johan Franzen evened things up with 7:08 left in the middle frame, skating around defenseman Mark Stuart to break in on Pavelec all alone before snapping a shot off the post and in for a power play goal.

Mathieu Perrault would restore the Winnipeg lead with 3:48 left in the period, carrying the puck from behind the net into the right faceoff circle before turning and snapping a shot past Mrazek.

Mrazek finished the night with 28 saves on 31 shots in his first appearance of the season. Pavelec made 23 saves on 27 shots.

Detroit finished the night one-for-four on the power play while Winnipeg was scoreless on three tries with the man-advantage.

The Red Wings are next in action on Saturday when they wrap up their three-game road trip in Toronto.

Detroit was without forwards Pavel Datsyuk (groin) and Stephen Weiss (conditioning assignment). Defenseman Jakub Kindl was a healthy scratch while Xavier Ouellet made his season debut… Prior to the game, forward Andrej Nestrasil was claimed off waivers by the Carolina Hurricanes.