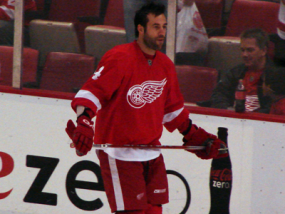 Todd Bertuzzi and Darren Helm scored within 44 seconds of each other late in the Red Wings’ Tuesday night matchup with the Edmonton Oilers, carrying Detroit to a 5-3 win.

Bertuzzi’s second of the night broke a 3-3 tie with 2:50 remaining and Helm added an insurance marker with 2:06 left in the game.

Bertuzzi scored on a shot from the left faceoff circle that deflected off of the skate of defenseman Ladislav Smid in front of the net and past goalie Nikolai Khabibulin.

Helm outwaited Khabibulin on a rush, cutting to the slot and snapping a shot into the top corner after Khabibulin went down.

The goals came after the Oilers had rallied from two down to start the period, tying the game.

On a delayed penalty 4:54 into the third, Theo Peckham jumped up and snuck into the slot, where he took a pass from Sam Gagner and snapped a shot past Detroit netminder Chris Osgood.

Gagner would tie the game with 8:29 left, slipping a shot from the left circle through Osgood’s pads after a faceoff win.

Henrik Zetterberg opened the game’s scoring just 3:43 in with a slap shot from the blue line.

Gilbert Brule responded with 8:22 remaining in the first, skating around Kris Draper to get to the slot and take a feed from Liam Reddox, backhanding a chance past Osgood.

Bertuzzi’s first of the night made it 2-1 at 6:40 of the second, when he scored on a wraparound chance.

Draper raced to the net to take a feed from Helm and backhand a shot over Khabibulin with 9:17 remaining in the middle period to make it 3-1, setting up the third.

Though the Oilers did get a goal on a delayed penalty, neither team scored on the power play. The Red Wings had two tries while Edmonton had three.

Osgood stopped 22 of 25 shots in earning the win. Khabibulin made 32 saves on 37 chances.

The Red Wings now have two days off before they visit the Calgary Flames as their five-game road trip continues.

Detroit was without Patrick Eaves for the third consecutive game. Tomas Tatar continued to play in his place.