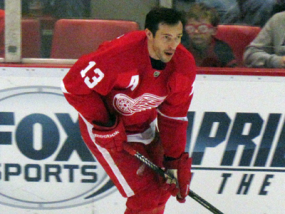 Detroit forward Pavel Datsyuk scored two power play goals but it wasn’t enough for the Red Wings, as they dropped a 3-2 decision to the Winnipeg Jets in a shootout.

With the loss, the Red Wings’ home losing streak reached six games. It’s their longest such streak since the 1996-97 season. They haven’t won an overtime game at Joe Louis Arena in ten tries.

Devin Setoguchi and Andrew Ladd both scored in the tiebreaker for Winnipeg. Daniel Alfredsson scored for Detroit but both Datsyuk and Todd Bertuzzi were stopped.

Winnipeg opened the game’s scoring at 7:10 of the first period when Bryan Little was left wide open on the left wing on a three-on-two rush, taking a cross-ice pass from Blake Wheeler and snapping a shot past Detroit netminder Jimmy Howard.

Datsyuk would even things back up with 5:16 remaining in the period. On the man-advantage, Henrik Zetterberg got the puck in the right faceoff circle and sent it across to Datsyuk low in the left circle for a quick wrister over Jets goalie Ondrej Pavelec. tying things up at 1-1.

After a scoreless second period, Winnipeg regained the lead on a broken play at the 10:47 mark of the third. Detroit defenseman Kyle Quincey lost his stick on the initial rush into the Detroit zone and by the time he got it back, Zach Bogosian had gotten the puck all alone in the slot. Bogosian faked around the scrambling Quincey and flung a shot in behind Howard, who had come far out of the net to cut down the shooting angle.

Datsyuk would tie things again just 2:24 later. A single second after the expiration of a Detroit five-on-three, Datsyuk scooped up the rebound of a Johan Franzen chance at the side of the net and tucked it in around Pavelec’s outstretched pad to make it 2-2.

Pavelec finished the night with 41 saves on 43 Detroit chances, in addition to the stops on Datsyuk and Bertuzzi in the shootout. Howard made 19 saves on 21 shots without making a stop in the tiebreaker.

Winnipeg did not score on any of their three power plays while Detroit went two-for-four with the extra attacker.

The Red Wings look to snap their home losing streak on Friday when they host the Washington Capitals.

Franzen returned from injury to play in Tuesday’s game. Stephen Weiss (groin) replaced him on short-term injured reserve to make room on the roster… Jonathan Ericsson and Brendan Smith remained out. Both are expected to return on Friday… Daniel Cleary, Jordin Tootoo and Patrick Eaves were healthy scratches.