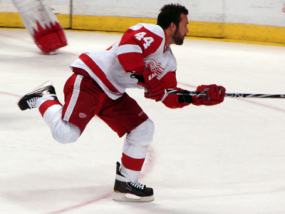 Bertuzzi Scores in Shootout to Carry Red Wings Past Coyotes

111
0
by Clark Rasmussen
In Game Recap

Todd Bertuzzi scored the only goal of the shootout Thursday night, lifting the Detroit Red Wings to a 3-2 win over the Phoenix Coyotes.

The victory put the Red Wings back into first place in the Western Conference, one point ahead of both the St. Louis Blues and the Chicago Blackhawks.

Bertuzzi’s shootout goal came on the backhand on a spin-o-rama move at the edge of the crease.

Bertuzzi had given the Red Wings their only lead of the game with 8:47 left in the second period. Johan Franzen sent the puck from behind the net to Bertuzzi at the bottom of the left circle, where he fired a rocket of a shot past Phoenix netminder Mike Smith to put Detroit up 2-1.

Brule tied things back up just 2:55 later when he carried the puck into the Detroit zone on a three-on-two and drove to the net, putting a shot between Howard’s pads.

Raffi Torres opened the game’s scoring only 2:23 into the game, beating Detroit goalie Jimmy Howard on a wraparound chance.

Ian White’s shot from top of the right circle made it 1-1 at 1:36 of the second period. It was the Red Wings’ 30th goal of the season from a defenseman.

Howard finished the night with 31 saves on 33 shots against. Smith made 33 stops on 35 shots.

Neither team scored a power play goal. Detroit had five tries with the extra attacker to Phoenix’s two, the second of which was in overtime.

The Red Wings’ next game is Saturday evening when they host the struggling Columbus Blue Jackets.

Mike Commodore and Jan Mursak were healthy scratches for the Red Wings.